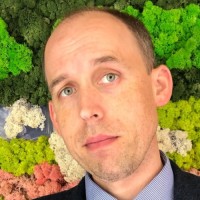 Paul Boshears is an Atlanta-based UX Researcher and Designer. He earned his PhD at the European Graduate School in Saas-Fee, Switzerland. A thought-leader on the intersection of culture and emerging technologies, his writings on art and neuroscience have appeared in publications like Neuron, Art Papers, and Newsweek.A co-founder of the media-agnostic publication platform, continent., Boshears has developed an internationally-recognized body of work. With world-class research skills, both quantitative (honed as a researcher at a Japanese neuroscience institute) and qualitative (doing highly-cited ethnological work on methamphetamine use), Paul also excels as a creative collaborator, and would love to learn more about your projects.

Do you have trouble navigating complexity within your organization and/or your product? In this talk we'd like to share anecdotes that illustrate the value of incorporating vocabulary and practices from Confucian Philosophy. The concepts and practices we'd like to share are useful for generating alignment for cross-functional teams. This is a talk demonstrating the value of UX acting as a "trusted counsel" for complex organizations developing complex products.

Designed with  by Amanda Worthington